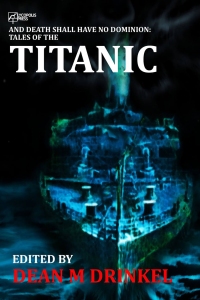 I am excited to share more publishing news this month. My story “The Jasper Scarab” is featured in a new anthology from Lycopolis Press edited by Dean M. Drinkel titled And Death Shall Have No Dominion: Tales of the Titanic.

At the time I wrote this story I had been reading a collection of noir short stories by some respected authors of the genre. I began exploring noir themes as I developed “The Jasper Scarab,” moving on to a divergent path from my standard horror and dark fiction work. I couldn’t tell you with any certainty that the final story is indeed noir or something else, but the dark influence is most certainly there.

“The Jasper Scarab” tells the story of William Boyd, a lone childhood survivor of the Titanic disaster. An ancient Egyptian artifact that traversed the Atlantic with him appears to be the common thread in a series of tragic events involving loved ones, yet William cannot depart with the object despite his several attempts.

And Death Shall Have No Dominion: Tales of the Titanic is available in paperback on Amazon in the US and UK. 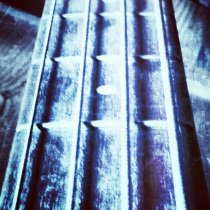 This looks great, my kind of stuff. Dark Continents Publishing has put out a call for submissions for Guns and Romances. Closing date for submissions is February 28, 2014, for publication estimated in late-2014. Click on the link for full information.

Call for Submissions: Guns and Romances 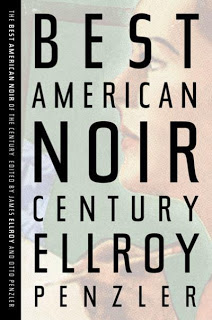 I love noir. It contains or shares elements of various genres I am drawn to and tend to write in, like disturbed and unusual psychological issues, dystopian themes, hard-boiled character-driven drama, brutal honesty, and gritty realism when it comes to the human condition. I selected several stories from The Best American Noir of the Century, a 731-page short story anthology edited by James Ellroy and Otto Penzler, for this craft-base blog entry.

The anthology is filled with so many great authors and stories I had a hard time deciding where to begin. As the anthology is assembled chronologically by publishing dates, I settled on the earliest works, ranging from 1923 to 1952, to determine what common threads exist between these various stories that classify them as noir. Otto Penzler explains in the Foreword, “noir … is virtually impossible to define, but everyone thinks they know it when they see it. Like many other certainties, it is often wildly inaccurate.” I love this fact about this genre. Its definition seems to reside somewhere in our collective subconscious, an area where the darker side of humanity dwells and occasionally surfaces to disrupt everyday life. Penzler finished the Foreword by saying, “If you find light and hilarity in these pages, I strongly recommend a visit to a mental health professional.” I wouldn’t say I found anything light and hilarious, but I was fascinated by these stories.

Penzler’s statements issued a challenge: what defines noir and makes it so appealing? After reading the stories from Tod Robbins, James M. Cain, Steve Fisher, MacKinlay Kantor, Day Keene, Dorothy B. Hughes, Howard Browne, and Mickey Spillane, the common thread I found was a casual attitude toward death: either the thoughts of killing, driving someone to suicide, or following through with emotionally charged murder, with or without remorse.

In Tod Robbins’s “Spurs,” the short story that was the basis for the controversial 1933 film Freaks, Jacques Courbé, a seemingly harmless circus-performing dwarf, is capable of breaking his wife’s vitality and spirit in exchange for her teasing during their circus wedding and subsequent plans for his wealth. The beautiful, strong, and talented Jeanne Marie only married him for his inherited fortune, he quickly found out. She found him to be a joke as she was determined to keep him at bay and eventually cause his death and take ownership of his inheritance. A year after marriage when the circus was back in town, Jeanne Marie runs to the aid of her old boyfriend the charming bareback rider Simon Lafleur, the “circus Romeo,” to whom she planned to return to after Courbé was dead. Courbé, with the help of his wolf-dog companion whom was also his performance partner and mode of transportation, tracked them down and killed Lafleur.

M. Jaques Courbé cleansed his sword on a kerchief of lace, dismounted, and approached Jeanne Marie. She was still crouching on the floor, her eyes closed, her head held tightly between both hands. The dwarf touched her imperiously on the broad shoulder which had so often carried him.
“Madame,” he said, “we now can return home. You must be more careful hereafter. Ma foi, it is an ungentlemanly business cutting the throats of stable boys!”

In the 1946 story “The Homecoming,” by Dorothy B. Hughes, a strong jealous rage causes the protagonist, Benny, to kill his girlfriend Nan and an old war hero boyfriend who visits her after returning home from Korea. The whole story is focused on Benny’s jealously of Jim, the celebrated war hero and popular kid from high school, as he walks to Nan’s home, climaxing in their unintended deaths. At least he thought the murders were unintentional, despite carrying a gun to the home with the intention to put Jim in his place.

There were lights in most of the houses. You’d think the neighbors would have heard all the noise. Would have come running out to see what was going on. They probably thought it was the radio.

They should have come. If they had come, they’d have stopped him. He didn’t want to kill anyone. He didn’t want even to kill Jim. Just to scare him off. Just give him a scare.

Mickey Spillane’s 1953 story “The Lady Says Die!” portrays a story of a wildly successful Wall Street broker, Duncan, an otherwise good man, who exacts revenge upon an old schoolmate and rival Walter Harrison who took his fiancée away from him through a course of one-upmanship and married her for a short time. He reveals to a detective over drinks his desires and the course of events that led to Walter’s death.

God, how I hated that man! I used to dream of killing him! Do you know, if ever my mind drifted from the work I was doing, I always pictured myself standing over his corpse with a knife in my hand, laughing my head off.

Playing off his rival’s weakness of getting everything he desired, a well-planned series of seemingly causal and innocent events drives Walter to suicide on the anniversary of the date he had stolen Duncan’s fiancée.

Interestingly, one story in this selection had self-awareness for the noir genre, in that human death could not occur as one might suspect. “Gun Crazy,” published in 1940 by MacKinlay Kantor, follows the life of Neslon Tare, who is obsessed with guns from the age of six. He develops amazing dexterity and shooting accuracy, eventually giving way to becoming an outlaw robbing banks and using his trick shooting skills to his advantage to evade capture. The twist, as is revealed by the characters who know him best having grown up with him, is that he cannot hurt a single living soul, he is incapable of shooting people or even rabbits during a hunting trip as a kid. This weakness leads to his eventual capture and imprisonment, and no one, surprisingly, dies.

“You’ll Always Remember Me,” by Steve Fisher, published in 1938, was perhaps the most disturbing of the stories I read. Told in the first person, the 14-year-old protagonist Martin Thorpe reveals his penchant for torturing and killing, both animals and humans. He has a history of being thrown out of schools for causing problems, only accepted into the current military school because his father is wealthy and paid double tuition. He feels remorse for the older brother of his girlfriend about to be executed for his father’s murder, the central theme of the story. However, Duff Ryan, a young detective, senses Thorpe is behind the murder, using a gruesome tactic to prove his suspicions.

Duff walks Thorpe to a chapel on the school campus discussing his violent past school records, beginning the conversation that they had a job to do, to “kill a kitten,” one that had been severely injured by a car and Duff kept alive with an injection to reduce pain for this scene.

I could see the funny twist of his smile there in the moonlight. His face looked pale and somehow far away. He looked at the cat and petted it some more. I was still shaking. Scared, I guess.

He said, “Too bad we have to kill you, kitten, but it’s better than that pain.”

Then, all at once I thought he had gone mad. He swung the cat around and began batting its head against the pillar in the chapel. I could see the whole thing clearly in the moonlight, his arm swinging back and forth, the cat’s head being battered off, the bright crimson blood spurting all over.

He kept on doing it and my temples began to pound. My heart went like wildfire. I wanted to reach over and help him. I wanted to take that little cat and squeeze the living guts out of it. I wanted to help him smash its brains all over the chapel. I felt dizzy. Everything was going around. I felt myself reaching for the cat.

With the awareness that Duff was testing him, he manages to restrain himself and not partake in the cat’s killing. Soon after, Thorpe is able to act on his desire to kill, when he pushes Pushton, a younger kid who plays the bugle each morning, out of a dormitory window to his death. Thorpe is eventually caught for the murder of his girlfriend’s father and takes pride in the fact that he cannot go to prison or be executed because of his young age, reform school was his only punishment. To his frustration however, no one believes he was behind the death of Pushton as much as he brags about it, as it was attributed to an accident.

The blatant unapologetic honesty of human desire and controlling the fates of other people’s lives is central to all of these stories. Filled with emotional and psychological complexities based around human relationships and perceptions, noir contains an incredible gamut of storylines and settings, each story as compelling, even more so, than the last. And the beauty of it all is that these stories are timeless, as human nature has not changed in the past century, if not millennium, and probably never will.