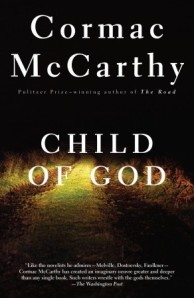 Here I am recovering from another great Cormac McCarthy novel trying to figure out my take on aesthetics for this week. I finished reading Child of God the other day and I’m still piecing together what exactly it is about his writing I love so much. His style holds an intriguing dichotomy of illustrative scenery that grabs all senses juxtaposed with minimalist storytelling.

When I say minimalist, I mean it in the proper sense; McCarthy’s prose are not at all over-simplified, rather, they are tight and methodical. Every word of action and dialog is intentional, including every word he leaves out forcing the reader to engage. There is no room allowed for flowery superfluous language to gently carry the reader downstream. Such a passive reader would be lost on the first few pages blindly tripping over the gaps.

I had originally thought it was the lush environments and creative word choices I was enamored with. After deeper introspection I realized it was this minimalist technique inducing reader engagement. I like to be challenged as a reader, to connect implied situations to each other and draw conclusions, not once being told what to think.

McCarthy is a genius in this regard. I cared about the pathetic life of Lester Ballard – an uneducated 27-year-old cave-dwelling psychopath – despite his vile behavior and despicable actions. I don’t recall a single redeeming instance in this character’s life, yet I was vested in his day-to-day survival living on the fringe of a rural community.

Not once did McCarthy tell me I am supposed to care about the protagonist, nor did he tell me to hate him. In fact, most of what I learned about the character was indirect. Small details were leaked throughout the novel revealing just how screwed up this guy was, wearing the ill-fitting clothes and stitched-together scalps of his victims while collecting their corpses for his pleasure. Gruesome on every level. Only a few actual violent acts are fully depicted, yet the reader can infer these acts occur frequently at similar magnitude.

She was lying in the floor but she was not dead. She was moving. She seemed to be trying to get up. A thin stream of blood ran across the yellow linoleum rug and seeped away darkly in the wood of the floor. Ballard gripped the rifle and watched her. Die, goddamn you, he said. She did. (p. 119)

He’d long been wearing the underclothes of his female victims but now he took to appearing in their outerwear as well. A gothic doll in illfit clothes, its carmine mouth floating detached and bright in the white landscape. (p. 140)

Perhaps that is the root of McCarthy’s hold over me as a reader – the inherent aesthetic beauty of his writing – the fact that he produced for me subliminal responses on top of the conscious conclusions I was formulating. But there are multiple other levels to appreciate, beautifully crafted sentences and careful word choices to minimalistic story-telling.

Old woods and deep. At one time in the world there were woods that no one owned and these were like them. He passed a windfelled tulip poplar on the mountainside that held aloft in the grip of its roots two stones the size of fieldwagons, great tablets on which was writ only a tale of vanished seas with ancient shells in cameo and fishes etched in lime. Ballard among gothic treeboles, almost jaunty in the outsized clothing he wore, fording drifts of kneedeep snow, going along the south face of a limestone bluff beneath which birds scratching in the bare earth paused to watch. (pp. 127-128)

Was he cognizant of this capability to induce multiple response levels when writing the book forty years ago? Perhaps, I recall a similar reaction to reading The Road. I plan to read more of his work to find out.

9 thoughts on “On writing aesthetics: inferences and implications”