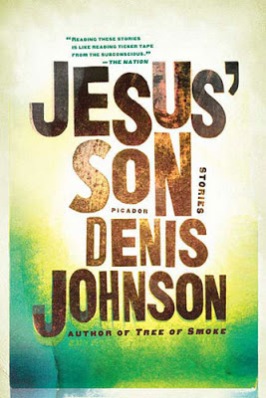 The collection of short stories of Jesus’ Son is something of a paradox. The graceful and poetic language portrays dark and depressing situations occupied by people at their lowest points performing despicable acts. Fluid and sensuous prose carry the narrative forward effortlessly; the time it takes to read the book becomes irrelevant. This was my first time reading Denis Johnson’s work, and not knowing anything about him, I wondered if these vivid stories were pulled from real-life experiences. Either way, I was captivated.

Johnson makes a hospital orderly moving through his day in the story “Emergency” on a drug high sound warm and simple. He seemed to have reached a heightened state of bliss among a bleak and stressful world, while the dire risks of his actions were always prevalent.

Everybody had a different idea about exactly how to approach the problem of removing the knife from Terrence Weber’s brain. But when Georgie came in from prepping the patient—from shaving the patient’s eyebrow and disinfecting the area around the wound, and so on—he seemed to be holding the hunting knife in his left hand. (Loc. 694-696)

Duality is consistently portrayed in an illustrative storytelling motif throughout the stories through an inebriated perception of people and self, and their relationships to the environment. This is a polar extreme to the clichéd my head felt like a balloon and floated from my body and over the green pastures type of hack:

Under Midwestern clouds like great grey brains we left the superhighway with a drifting sensation and entered Kansas City’s rush hour with a sensation of running aground. (Loc. 39-40)

It was a long straight road through dry fields as far as a person could see. You’d think the sky didn’t have any air in it, and the earth was made of paper. Rather than moving, we were just getting smaller and smaller. (Loc. 451-453)

All senses are engaged. Johnson places the reader in the environment through deliberate figurative prose. Landscape description appear frequently, along with the integration of nature, setting the tone of the immediate physical world and then on a higher existential level consistent with the protagonist’s thought process. Consider these examples:

The road we were lost on cut straight through the middle of the world. It was still daytime, but the sun had no more power than an ornament or a sponge. In this light the truck’s hood, which had been bright orange, had turned a deep blue. (Loc. 753-754)

What word can be uttered about those fields? She stood in the middle of them as on a high mountain, with her red hair pulled out sideways by the wind, around her the green and grey plains pressed down flat, and all the grasses of Iowa whistling one note. (Loc. 567-568)

Descriptions of settings often take on a stream of consciousness quality through the protagonist’s altered perceptions while incorporating actions and people as part of the holistic environment. In this way, Johnson effectively animates common activities like riding on a ferryboat or a subway train:

The day was sunny, unusual for the Northwest Coast. I’m sure we were all feeling blessed on this ferryboat among the humps of very green—in the sunlight almost coolly burning, like phosphorus—islands, and the water of inlets winking in the sincere light of day, under a sky as blue and brainless as the love of God, despite the smell, the slight, dreamy suffocation, of some kind of petroleum-based compound used to seal the deck’s seams. (Loc. 1000-1003)

I sat up front. Right beside me was the little cubicle filled with the driver. You could feel him materializing and dematerializing in there. In the darkness under the universe it didn’t matter that the driver was a blind man. He felt the future with his face. And suddenly the train hushed as if the wind had been kicked out of it, and we came into the evening again.(Loc. 948-951)

People are treated in a similar descriptive manner giving them identifiable realistic traits leaving no room to question their authenticity:

He stood hugging himself and talking down at the earth. The wind lifted and dropped her long red hair. She was about forty, with a bloodless, waterlogged beauty. I guessed Wayne was the storm that had stranded her here. (Loc. 560-561)

He walked with a bounce, his shoulders looped and his chin scooping forward rhythmically. He didn’t look right or left. I supposed he’d walked this route twelve thousand times. He didn’t sense or feel me following half a block behind him. (Loc. 920-921)

I found the following quote in “Happy Hour” fitting to wrap up my take on Jesus’ Son. By intention or not it seems Johnson was poking fun at the style of his writing and its juxtaposition to the subject matter:

I stayed in the library, crushed breathless by the smoldering power of all those words—many of them unfathomable—until Happy Hour. And then I left. (Loc. 1147-1148)

One thought on “Writing Craft: Jesus’ Son by Denis Johnson”